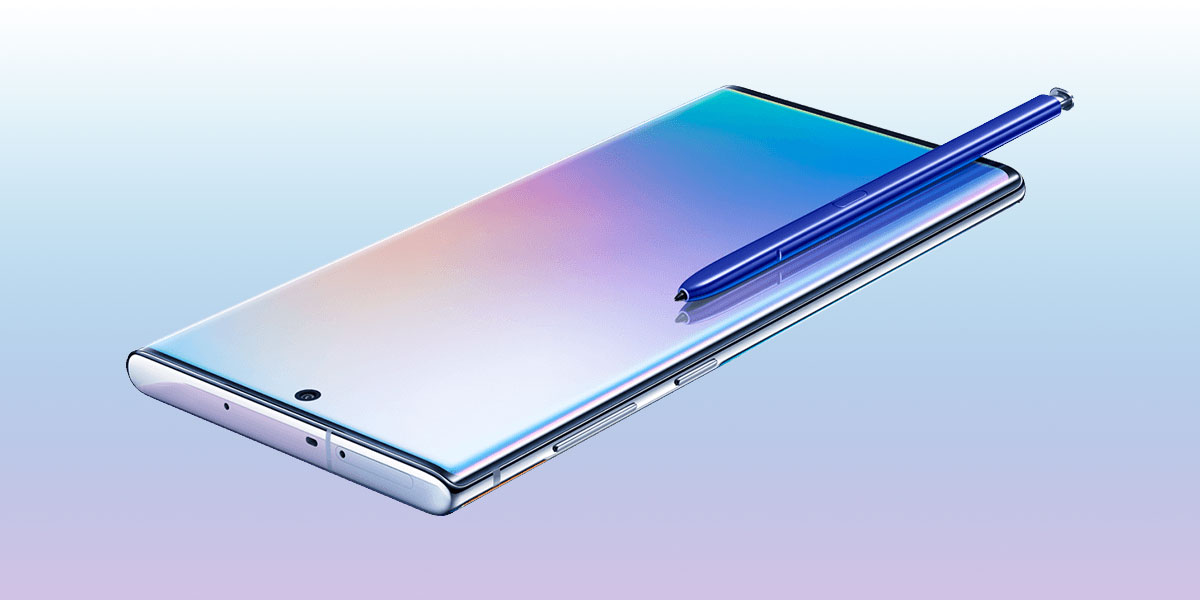 Posted at 08:22h in Android, Reviews, Samsung by Luke Ormerod
0 Likes
Share this

At an event that attracted the world’s media, Samsung this week unveiled their latest offering to the mobile phone market. The next incarnation of their popular Note series handset has hit the shelves, and there are three different phones which were showcased to the gathered audience.

The first thing that strikes you about the Note 10 is just how stunning it really is; there are two sizes of handset, the standard or vanilla Galaxy Note 10, 6.3-inch screen and the big brother the Galaxy Note 10 Plus, 6.8-inch screen. The third version is a Plus but comes 5G enabled and has the biggest price tag of them all.

Both versions are identical aside from the screen size aspect, and they are true masterpieces of engineering. Glass back and front with the aluminium band the handsets have the angular shape that denotes the Note series. Of course, you get the S-Pen with the phone and the new gradient colour handset shimmers and catches the light in a way we have not seen before; it is flawless.

As you work your way around the handset, you will quickly notice that there does not seem to be anywhere to plug your headphones, and that is because they have followed other phones in their stables and removed it. This has many reasons we are sure, but perhaps the biggest is the push towards wireless earbuds. Attending press packs included the buds to really hammer home the point, so bad news if you love your wired headphones, but hey, it could be time for a change.

Plus Takes the Crown

Frankly, if you are impressed by what you have seen from the Note 10, and really you should be because it is awesome, then we would suggest that the Plus size handset is the better bet, combined with one of our deals that bring it back into budget for you of course.

Why? Well for the simple fact that it has the addition of a removable microSD card slot which for some reason, the standard size handset has lost. This gives the smaller offering a fixed 256GB of storage whereas with the slot you can add a card of up to 1TB to really take it to another level. Of course, if you don’t store much, 256GB is still a decent amount.

The S-Pen is a feature that sets the Note series apart from the S series, and over the years it has been upgraded, so we were expecting something new this time. What Samsung has given us is the use of gesture controls meaning you can swipe your screen from far away, not too far obviously but you don’t actually have to swipe the screen the pen can do it for you. Oh, and did we mention the S-Pen with the gradient colour options is bright blue, if that makes any difference to you – we like it. Overall we predict the Note 10 is going to be flying off the shelves at an amazing rate because it is fabulous.