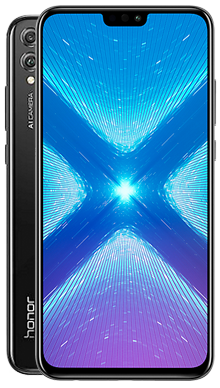 If you are looking for an outstanding mid range smartphone that looks like a premium offering, then the Honor 8X Black is well worth a second look 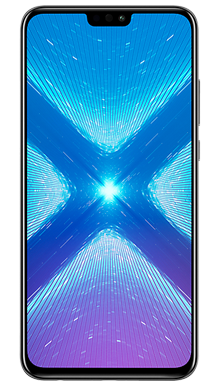 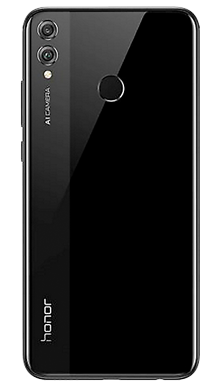 If you are looking for an outstanding mid range smartphone that looks like a premium offering, then the Honor 8X Black is well worth a second look
Product Details View Deals
SIM Free £199.99 inc VAT & Delivery

Select your desired options to find the best Honor 8x deals for you. 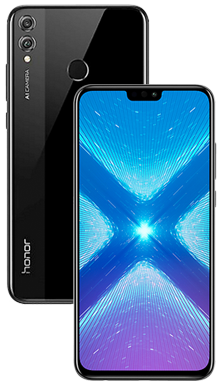 You may not hear as much about Honor as you do some of the other mobile phone providers but they are possibly the most up, and coming provider and the range of handsets that they have on offer is undoubtedly getting them noticed. They are part of the Huawei group which means that you can be sure they feature some of the most cutting edge technology and know how to bring handsets to the market that customers will love.

There is something really special about the design of the Honor 8X Black; it sits in the hand like the most expensive rivals, and yet it has a price tag that will please many a pocket. It is finished front and back with glass panels; the front is Corning Gorilla Glass 3 for added peace of mind. The sides are trimmed in metal, and this really does have a top-ranking look and feel. This is an all screen offering that catches the eye, and although there is the slimmest of bezel detailing along the top, this does not detract in any way from the stunning screen. We love that Honor ships their handsets with a screen protector already added in the factory, and this is something we wish other companies would do as it makes o much sense. Trying to add one at home is often just frustrating and leads to irritating bubbles, but this offering is perfect.

Turning the handset over the back is sleek and features the biometric fingerprint scanner which is in the middle of the handset and sits under the finger naturally. The screen is a great size at 6.5-inches perfectly appealing to the almost but not quite phablet market. This is the sort of handset that is going to appeal to gamers and those who love to stream movies. The screen is LCD and has a 1080 x 2340 pixels and an aspect ratio of 19.5:9 so totally perfect for either of those.

When it comes to audio Honor have ticked all of the boxes again. They have wisely decided to leave the standard 3.5mm headphone jack which will please many users. In a trend that is seeing many manufacturers remove this feature those who choose to keep it attract a wide audience of users who love their wired headphones and are not ready to give them up. When it comes to the speaker, the performance is clear and crisp giving you scope to make hands free calls or stream music and films in a quieter room.

When it comes to cameras the rear of the handset features a neat dual lens arrangement that has been designed to help you capture the best pictures every time. The main lens is a 20 MP, f/1.8, 27 mm (wide), PDAF offering which works well with the supporting 2MP backup lens featuring a depth sensor. There is an LED flash, HDR and panorama and when this is combined with the supporting software the end results are fantastic. Both the front and the back camera can record video so you can capture and record your day in film or stills for the perfect memories.

Inside the camera, we were not disappointed with their choice of hardware, as it brings everything you would expect and more. You will find the perfect marriage of Hisilicon Kirin 710 (12 nm) chipset which has a Mali-G51 MP4 GPU and an Octa-core (4x2.2 GHz Cortex-A73 & 4x1.7 GHz Cortex-A53) CPU which is more than man enough for the job. In terms of software, you have the EMUI 9.0, and the phone comes with Android 8.1 Oreo which can be upgraded to Android 9.0 Pie.

The battery offers a good performance and is a weighty 3750mAh which gives you the peace of mind to take the phone away from the power for a day and be able to use your handset for multiple processes and still make it back to the charger at night. As yet there is no wireless charging on offer but the power lead offers fast charging, and you will be pleased with how quickly the handset charges. The handset offers plenty of storage so you will find all the space you need with the added advantage of a microSD slot which enables you to add up to 400GB more storage should you need it.

We predict that this handset is going to be flying off the shelves and with good reason. It has the look and feel of a premium handset and yet has a totally affordable price tag. It can hold its owner against higher spec phones and really gets the job done.

One of the things we strive for at Fonehouse is being able to offer our customers the best range of handsets, and once they have found the handset that they really want, they can also choose from the broadest range of pay monthly deals to create the perfect package that comes in on budget. We have had our team of deal hunters on the case, and they have come up with some fantastic offerings.

We partner exclusively with EE and Vodafone because we also want to ensure that you have the best service going forward and we know that these providers have the best network coverage within the UK and that they both offer some excellent international calling plan deals for customers who need to travel. They also provide some great free network gifts so look out for these on the deals page.

To find out more about the Honor 8X Black or any of the amazing deals that we have on offer then why not call our UK based customer service team on 0333 900 1133 and they will be delighted to help you.

Q. Does the Honor 8X have the Play Store?

A. Yes, the Honor 8X does have the Google Play Store.

Q. Does the Honor 8X have NFC?

Q. Is the Honor 8X waterproof?

A. The Honor 8X does not have an IP rating. This means the phone is not marketed as water resistant and we wouldn’t suggest taking it in water.

Q. Does the Honor 8X come with a screen protector?

A. The Honor 8X does not come with a glass screen protector. It has a plastic cover to protect the phone whilst in the box.

Q. Does the Honor 8X have wireless charging?

A. The Honor 8X is not compatible with wireless charging.

A. The Honor 8X is available as a dual-SIM handset.

Q. Does the Honor 8X have Gorilla Glass?

A. The front display of the Honor 8X is protected with Gorilla Glass 3.

A. Yes, the Honor 8X does support fast charging technology.

Q. Does the Honor 8X have 4K video recording?

A. 4K video recording is not available on the Honor 8X.

A. The Honor 8X has a 6.5-inch LTPS IPS LCD touchscreen, so it is a larger handset.

Battery
up to 2hrs

Battery
up to 2hrs