The Evolution of the iPhone

With the new iPhone on the horizon, we thought it would be a great time to look back on the last 14 years of iPhone and see how far things have come. The first iPhone was introduced in 2007 – it was actually announced 6 months before it even went on sale in the US, which is very different to how the phone is launched now. So, let’s take a look at how the iPhone has developed over the years.

Released in 2007, in this first-generation iPhone, there was no selfie camera or ability to record video. It did have a standard headphone jack and a range of built-in apps such as safari and maps but it had no app store so you couldn’t download more apps. 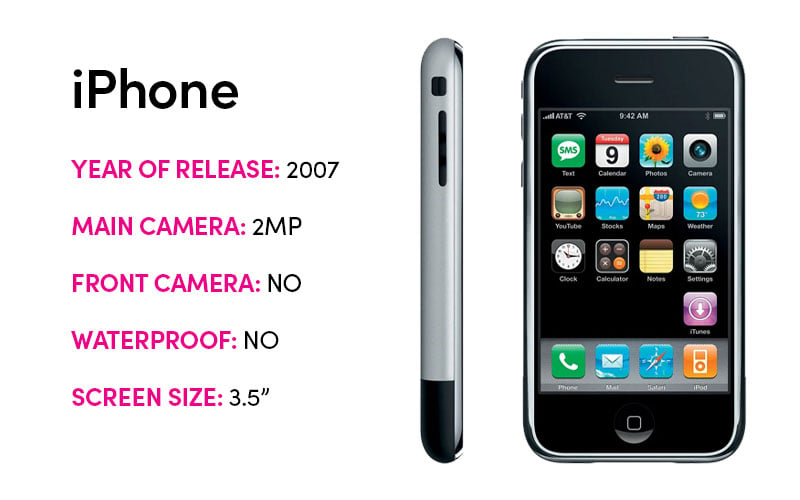 Just a little over a year later, the second iPhone was released – this time aptly named the iPhone 3G as it now included GPS and 3G data. This time the handset was a little thicker than it’s predecessor. This was also the first iPhone to also be available in white. This time, the phone did have the app store, so there was the option to download more apps but still no video recording.

It wasn’t until 2 years later that the iPhone 4 was released, so as you can imagine big changes came with this new handset. It featured a new sleek design, upgraded camera and the new selfie camera. This launch featured a higher storage capability with the phone now available in 8GB, 16GB and 32GB.

The iPhone 4S, although at first may not seem like one of the biggest releases, actually featured some pretty impressive changes. In 2011, Apple launched the 4S, the upgraded version of the iPhone 4, with one big difference – this was the first iPhone to feature Apple’s voice assistant – Siri. It also marked the launch of the storage system, iCloud.

The next year saw the release of the iPhone 5, which for the first time featured a larger screen than its predecessors. It was also the first iPhone to feature a selfie camera for other uses than video calling – and Apple have never looked back. This iPhone had major design changes, including the introduction of the smaller USB connector – the lightening cable and the Nano Sim. It was also the last model to be overseen by Steve Jobs.

Released in 2013, and seen as an upgraded version of the iPhone, the 5S had some pretty interesting new additions. The iPhone 5S again featured the new design and larger screen and came with a storage capacity of up to 64GB. The iPhone 5S was the first iPhone to have fingerprint sensors and to utilise touch access. It also came in more than two colours – this time Apple offered a Space Gray as well as a White/Silver and a White/Gold version.

Again, with the iPhone 6 came another design change – this time back to the slightly rounded appearance that the iPhone 3G had. The iPhone 6 also launched Apple Pay – which was available for use with Visa, MasterCard and AMEX.

In 2015 Apple released the 6S. Similar in design to the iPhone 6, this new handset featured a better-quality camera and came in a new colour – rose gold. Everything else remained similar – but with a few upgrades.

Similar in design to the iPhone 6 and 6S, the 7 had the same size screen and the same 12MP camera. The iPhone 7 was the first iPhone to be waterproof. With the launch of the iPhone 7, Apple removed the standard headphone jack and instead changed their headphones to fit the lightening cable. It was also at this time that Apple began making ‘plus’ models of their phones for those who prefer a larger handset. So, alongside the iPhone 7 came the iPhone 7 Plus.

In 2017, 10 years after the first iPhone was launched – Apple launched the iPhone 8, the iPhone 8 plus and the iPhone X. The iPhone 8 was fairly similar in design to the iPhone 7 aside from a few upgrades such as power charging and wireless charging options. As with the iPhone 7, the 8 was also available in a larger size.

The iPhone 8 launch was somewhat overshadowed by one of Apple’s biggest releases to date – the iPhone X. Although announced at the same time, this release happened a couple of months later in November 2017. It was one of Apple’s biggest design chances that saw a massive increase in screen size as well as a vast range of improvements. At this point Apple got rid of the home button – instead replacing touch access with face recognition.

A year later, Apple improved upon the iPhone X and launched the XS. With it they also launched the XS Max and the XR which was the more affordable option. 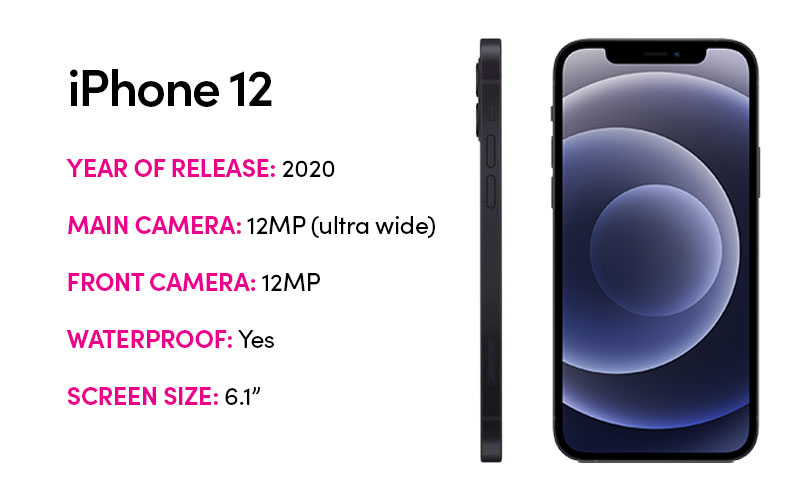 It really does take you down memory lane looking through each iPhone model from the past 14 years. Now, we hope you are as excited as we are to see what Apple have in store for us in 2021. For now, you can shop all our current iPhone deals here.